Obsession and Someone Out There

Personal experiences often spark off stories and that’s how this one started. Someone I knew became the target of another person’s obsession. Bit by bit, the problem escalated, until it reached a violent climax.

Everyone was stunned that things could get so out of control and, afterwards, we all tended to dismiss it as a one off – “the actions of a nutter” and “a set of really unlucky circumstances.”

Maybe it made us feel more comfortable to think it was a rare occurrence. But the truth is that many things trigger obsession and many people suffer from it. And sometimes, as happens to Laura in Someone Out There, lives get shattered without any provocation.

There’s the rejection obsession; a jilted lover who wants revenge or reconciliation or a bit of both. Like the man who stalked his ex-fiancee for two years after she left him. To start with, he sent her flowers and cards pledging his undying love. She had gone back to live with her parents and he spent hours waiting in his car outside their house. When he got nowhere, his behaviour became increasingly threatening. Before the police charged him, he had spray-painted vicious messages on the garden fence, distributed flyers to the neighbours detailing her sexual habits, severed the fuel line on her father’s car and punctured her tyres with a screwdriver.

There’s the resentment obsession; a perceived injury or humiliation where often the target is someone encountered in their professional role. Like the man who blamed his GP for the death of his wife. Her routine cervical smear was abnormal but the GP couldn’t tell her because the couple had moved and there was no forwarding address. The man tried, but failed, to get redress through legal channels and then claimed there was a “cover-up”. He visited the GP at her surgery and told her he would make her suffer in a long, drawn out way, as his wife had done. He informed the waiting room of alarmed patients that the doctor had murdered his wife; he dropped a dead rat through her letterbox along with photos of a cemetery with the doctor’s name on all the headstones. Then he threatened her life and that of her young family.

There’s the love obsession; all-consuming desire, dominating every thought, despite repeated rejections by the object of that desire. Like the woman convinced that her boss had romantic feelings for her. She had always admired him and knew that he was recently divorced. Her love crystallised when he chatted to her one day about the weather. She began stalking him and was distraught when she saw him meeting another woman. She accused him of cheating on her, accused the woman of stealing him away from her. The situation escalated until she threatened to kill them both, eventually confronting her beloved with a shotgun she took from her brother’s gun cabinet. The gun went off though no-one was hurt; she denied ever meaning to harm the man she loved.

Love, hate, jealousy, loneliness; an ex-partner, a stranger, a work colleague – obsession can be set off by any of them. When it strikes, psychiatrists say, it’s like a runaway train: starting at ten miles an hours, speeding up to sixty, then ninety and it just can’t stop or slow down. Obsessional minds are uncontrollable as, eventually, compulsion overthrows all reason.

What happens to Laura could happen to any of us. Wrong place, wrong time… 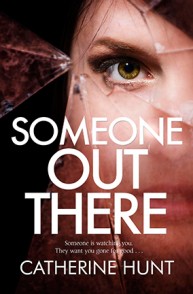 Buy book Now
Back to Articles